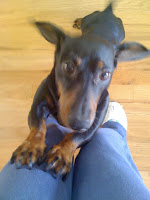 Man's best friend. You have heard that phrase before I’m sure. It’s the name we give to our beloved dogs. The reason they have been given this title is because they are consistent, faithful and always loving. No matter what happens, they stay close. Even when they do something wrong and tuck their tail, its just moments till they are trying to get back into our good graces again.
My dog's name is Midnight. The other day he went out to the backyard and came back to the door several minutes later. He looked like he had been rolling in dirt. I grabbed him up and put him in the bathtub to clean him off. I was so mad at him for getting all muddy. In a moment the water was all red...he was bleeding! Something had attacked him in our own backyard and I didn't even know it! I was mad at myself for getting mad at him! I felt like I let him out into a cold, hard world. Still, after I nursed his wounds and got him better, he was right there beside me and closer than ever. I thought about Jesus and how He was described as one who sticks closer than a brother...a real, true friend.

Maybe you need a best friend...a "real" friend today. Perhaps you have been let down by someone that you confided in and trusted in. A DOG is nice but if you reverse the letters you see something better...GOD! Try God today!
Email Post