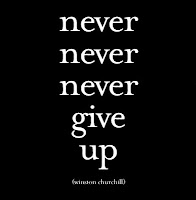 How much fight is in you? What would you be willing to do to be healed? I've been doing a series at church called Return to NeverLand. I'm going back to the place in my spirit where I NEVER give up and I NEVER back down!
I was thinking about the woman with the issue of blood in Mark 5 and how desperately she needed to be healed. She tried everything and used all her resources but was still sick. She heard that Jesus was coming. Multitudes were around him and following him. She ran towards the fight of her life!
She found a way to get through the crowd to touch his coat. As soon as you touched him, power was released to her. Jesus did not have to authorize it. Her faith opened the conduit for the blessing and the healing to come. There were many people surrounding the power of Christ. But only this woman who tapped into that power.
There is a difference between association and assimilation. Many people who are Christians associate with Him but fail to assimilate Him in their daily life. On that day in our scripture throngs of people were walking WITH Christ but only one was walking IN Christ! Her connection changed Christ's direction and brought her His affection.
Are you ready to fight through the layers of superfluous followers and those who "think" they have Christ to connect to His power?
Fight the good fight of faith! Never, never, never give up!