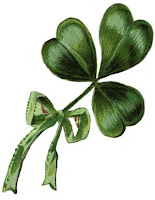 St. Patricks Day is the celebration in our country of everything that is green and Irish! But few really know juts who St. Patrick was. St. Patrick was very religious and is credited as the one who explained the trinity to Ireland.
He was also known for converting the pagans of Ireland to Christianity.
St. Patrick used the shamrock to explain the trinity, or the understanding of God as three distinct persons - God the Father, Son and Holy Ghost - in one godhead. It has three leaves with one stem on it, and that is how he explained the blessed trinity to that people, who happened to be a pagan people at that time.
According to Catholic.org, Patrick was born in Scotland, probably Kilpatrick, and was the son of Romans living in Britain. At the age of 14 or so he was captured by raiders and taken to Ireland as a slave to herd and tend sheep.
While living in Ireland, Patrick learned the languages and practices of the people there - mostly Druids and pagans. At the age of 20 he escaped following a dream in which God told him to leave Ireland by going to the coast, where he found sailors who took him back to Britain.

Patrick later had another dream in which the people of Ireland called out to the "holy youth" to return to them. He began studies for the priesthood and was ordained a priest and later a bishop.
Eventually he returned to Ireland to take the Christian gospel to the people there. Throughout about 40 years Patrick and his disciples converted thousands and built many churches throughout the country.
He was extremely important to the conversion of Ireland to the Catholic faith
You've got to love a guy that can use nature to explain faith and the Bible. Creation will always speak of its Creator. So today, rather than focusing on everything green and all people named O'Malley and Houlihan, remember the shamrock and think about the Father, the Son and the Holy Spirit!
Email Post