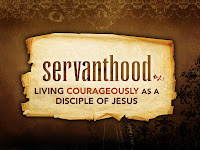 The way to measure success as a fully devoted follower of Christ is much different than the way our culture measures it. We see ads that tell us to make more money, get more stuff and move ourselves to a prominent position and then we will be a success. Jesus said in Mark 10 that if we want to be great we must first learn how to serve others. Service IS success. To be healthy and happy we must learn this.
A man spoke with the Lord about Heaven and Hell. "I will show you Hell," said the Lord. And they went into a room which had a large pot of stew in the middle. The smell was delicious and around the pot sat people who were famished and desperate. All were holding spoons with very long handles which reached to the pot, but because the handles of the spoons were longer than their arms, it was impossible to get the stew into their mouths. Their suffering was terrible.
"Now I will show you Heaven," said the Lord, and they went into an identical room. There was a similar pot of stew and the people had the same identical spoons, but they were well nourished, talking and happy.
At first the man did not understand.
"It is simple," said the Lord. "You see, they have learned to feed each other."
Serving others will take us higher than we ever imagined. It is true that what you make happen for others, God will make happen for you! Damian Hess talked about service in this way:
Giving what you don't have to give.
Giving when you don't need to give.
Giving because you want to give
As you move through your week, practice that art of servanthood. Live courageously by living loud through the lives of others. This is going to be a great day!