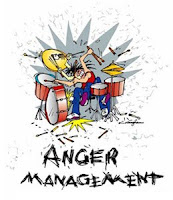 Two church members were going door to door and happened to knock on the door of a woman who was not happy to see them. She told them in no uncertain terms that she did not want to hear their message and she slammed the door in their faces.
To her surprise the door did not shut all the way, in fact it bounced open. She tried again really putting all her strength behind it only to have the same result-the door bounced back open.
Convinced these rude young people were sticking their foot in the door, she reared back to give it one last slam that would teach them a lesson, when one of them said, "Ma'am, before you do that again you probably ought to move your cat."
Too many times we assume things, judge people and act hastily only to find that "our own cat" is causing the trouble. We get angry and unleash. Sometimes its in words and other times with actions. Nearly every time its unproductive.
The Bible tells us not to let the sun go down on our anger...in other words, resolve the issues and calm the conflict. Anger will destroy you from the inside out. Things are not always what they seem. Take time to respond rather than impulsively reacting. Manage your anger so your anger won't manage you!