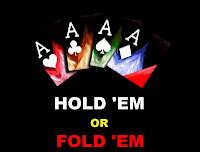 Acts 19:8-9 says..."Paul entered the synagogue and spoke boldly there for three months, arguing persuasively about the kingdom of God. 9But some of them became obstinate; they refused to believe and publicly maligned the Way. So Paul left them."

I like the fact that Paul was COURAGEOUS and bold about what he believed. I also admire that he was persistent in doing things that would spread the Word. Here scripture says that he spoke boldly, even argued persuasively for the sake of Christ. It also says that he did not get through and that eventually, he moved on.

It made me think about how much time we spend today arguing with people about our faith. Some hearts are going to receive the good news and be changed while others are never going to get it. Realize today that it's not our responsibility to make them believe...it's Gods.  Kenny Rogers sang a song with some great insight; "you got to know when to hold em, know when to fold em: know when to walk away, and know when to run." Choose your words carefully. Spend your time wisely. God will take care of the rest!