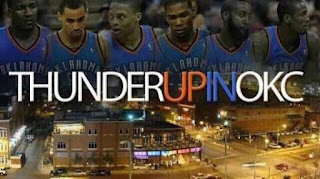 There's nothing better than watching David beat Goliath! Most of us count out the underdog and side with the experience. But some youths don't grow weary as are those young men on the OKC Thunder Championship team.
This young franchise rose up in strength and power and simply wore down the older and more experienced opponent. When David took down Goliath no one thought it could be done. In fact no one even tried. They even attempted to dress up David in a suit of armor that didn't fit! But David made it clear that he was going to be himself and the God that he served would take care of the rest. He just had to show up and make his throw count.
Last night as the Thunder rolled through the Spurs I was inspired to keep fighting, keep shooting and to never quit no matter what the "experts" say. This just may be my day to rise up and be the champion:)
Email Post