The Gospel According to Manilow 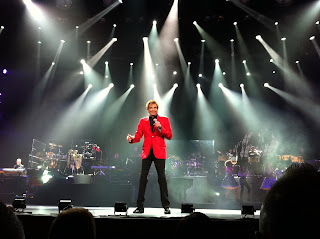 A few years ago I was sitting in the living room, reminiscing about the 70's.  Most of you know that I am a fan of the 70's and 80's music. In fact I was inspired to go to music school after seeing a Barry Manilow concert in Columbus Ohio in 1977. I've never forgotten that. Nor can I forget the birthday that I received a signed photo from him with a special wish. Those were some good days! So as a tribute to Mr. Manilow, here is a cup of joe featuring some popular song titles.
It was God who said first, “I write the songs that make the whole world sing. But I can’t smile without you. You and I are not like two ships that pass in the night. We are One Voice. With me you can weather life’s storms. And one day you will say, I’ve made it through the rain.”
So Even Now, we've got to stop asking ourselves could this be the magic and stop tryin’ to get the feelin’ again. It’s daybreak! Let’s hang on to what we’ve got because it looks like we made it to where God wanted us all along.
Are you ready to take a chance again? You don’t have to ask yourself where do I go from here or run off on a Weekend in New England. It’s a miracle…God has set all of this up because…
This one’s for you! @barrymanilow