Until the Next Door Opens... 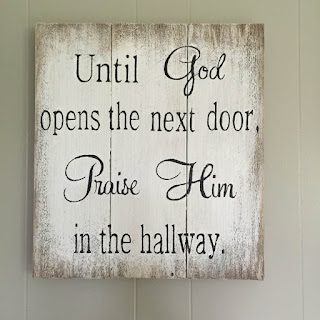 For the last few weeks I felt as though there was a subtle shifting taking place in which the Lord was beginning to open some doors and make a way for many people that have thought there could never be one. When things and people start to feel unsettled, it usually means God was up to something. Why now? What is so special about now? Why should I expect my breakthrough to happen at this time?
The Bible tells us that Jesus is consistent...He is the same yesterday, today and tomorrow. He is all about timing. Everything happens in His time. But what's so special right now is that we have begun to see the secret of synchronizing His timing and ours. The secret is what happens in the hallway!
When one door closes and you have left that season but a new season and door has not yet opened, you find yourself in that hallway...the uncomfortable space between where you were and where you are going. What happens here is crucial in synchronizing the timing of God. Praise IS the secret. When you praise Him in the hallway you begin to set all of the clocks to His time time and it won't be long until the new door presents itself and you are off and running into your breakthrough season.
So I can assume that most of you have already uncovered the secret and that is why you feel that shifting too? Keep an eye on that dial...its almost time! Praise Him!
Email Post