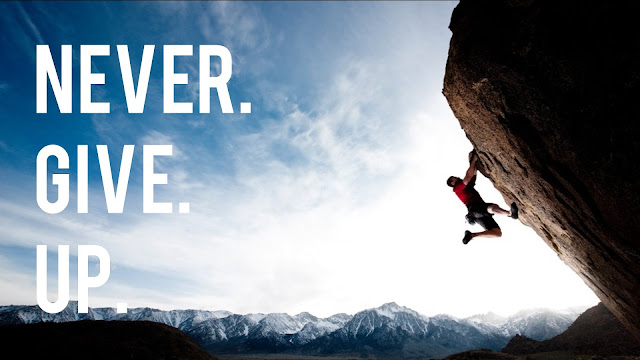 Did you know that Sir Winston Churchill took three years to finish the 8th grade because he had trouble learning English? Ironically years later he was invited to speak at the commencement exercises at Oxford University! As he arrived in front of the very appreciative applause of his admirers he walked to the podium; cigar, cane and top hat in tow. He removed the cigar from his mouth, set down his top hat and looked right into the eyes of the audience and said, "never give up!"After several seconds of silence he shouted once again, "never give up!" A profound silence gripped the crowd as he grabbed his hat and cigar and descended from the platform. His speech was over. That six-word exhortation was undoubtedly not the most eloquent speech given at that distinguished university. But I am certain that every person in the audience on that day remembered this one big message for the rest of their lives.
Discouragement has stopped many people from achieving their dreams and fulfilling God's plan for their lives. It often leads to depression and detaching from people and things that could bring life to you.
Maybe today you are feeling discouragements pull and your spirits are down and hopes are fading. Whatever you are going through CAN be gone through! You need to keep going, keep trusting and keep looking forward. Let those words of Sir Winston Churchill echo through your entire being and speak them to yourself...never give up!
Email Post