Away With the Manger? 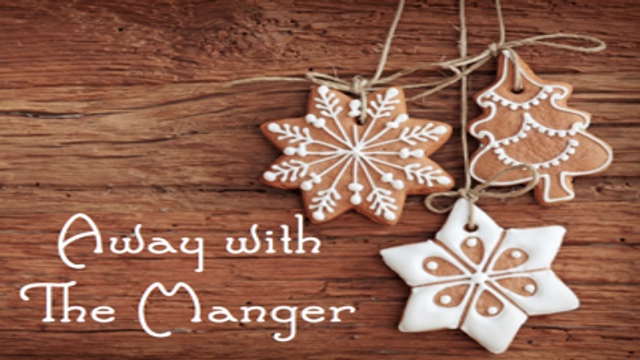 A controversy in Boston developed several years over what to call their city’s 48 ft spruce tree in their December ceremony. The city’s website called it a “holiday tree” instead of a Christmas tree and it set off an angry backlash. The righteous indignation became the voice of the people and the city officials relented. Bostons longest serving Mayor Thomas Menino told the reporters that he would keep calling it a Christmas Tree. He explained, “I grew up with a Christmas Tree: I’m going to stay with a Christmas Tree.”

The next year in Plano TX an independent school district banned students from wearing red and green at their winter break parties because they were considered Christmas colors. In Wisconsin students were asked to change the religious words in Christmas carols for their upcoming concert.
You remember it was an atheistic movement that tried to eliminate the phrase “in God we trust” from the currency and “under God” from the Pledge of Allegiance

So why all the fuss? Why MUST we say Happy Holidays? Where is Jesus in all of this? Why do they want to do away with the manger? The story of the birth of Christ is what the fuss is all about. The attack is not on the holiday or the merriment…it’s against the love of God that came down to earth as a little child with purpose. It’s about that “agape love” John 3:16
"For God so loved the world that he gave his one and only Son, that whoever believes in him shall not perish but have eternal life.
Let me offer some suggestions as to why so many folks are trying to refocus our eyes and diminish our joy.  This can also answer the question “why are they singing away with the manger?”

#1 because the birth of Jesus Christ fulfills prophecy…In Isaiah 9:6 the bible says that a son would be born, a child would be given and His name would be called wonderful, counselor, mighty God, everlasting father, prince of peace. Luke 2 gives us the account fulfilling what was foretold in Isaiah. You see, if we do away with this birth, this fulfilling of prophecy, then we can eliminate all that the bible says will come to pass…we can negate the impending judgment that will come upon all of us. If we can erase his birth, we can keep from exposing our sin.
#2 because the birth of Christ is miraculous.
He was born of a virgin. That’s a miracle. In that manger scene is where God and man collide in supernatural power. Wherever there are miracles, there will be controversy but there will also be healing. There will be an exchange of power…healing is an exchange of sickness for wholeness. This gift of God sent to earth would collide with man on many occasions…and every time there was a meeting of sin and grace, grace did much more abound!
#3 because the manger is the environment/atmosphere for salvation. Where the manger is, the focus is on Christ. You see God had a plan-motivated by great love-to send his only begotten son to pay his life as a ransom for our sin-that through death we might find eternal life.
When we look upon the manger scene, we see representations of life…wise men with gifts, shepherds, parents, a child, animals and nature. It’s the perfect backdrop to the creation of complete salvation…everyone is touched…but not everyone responds. The beautiful thing is that the environment of salvation is re-created still today each time a bible-toting, spirit-filled church exalts the name of this child that came wrapped up in strips of linen…humble to say the least.
Each week our spiritual hard-drive is hit with many hackers and a plethora of distractions. The manger is where the world “spiritually reboots’ and life is set right again. Our eyes are not on the stars but rather on the One who created those stars.
#4 because there is power in the name…at the name of Jesus, every knee shall bow and every tongue shall confess that He is Lord. The nativity scene that we enjoy throughout the holiday is simply a visible reminder that there was a night when our Savior was born. A child was sent by God…a life given so that new life might come. The wood of that manger would one day give way to the wood of the cross…a cross that would hold his life and our sin to it…and his blood would flow so that we might forgive and be washed clean forevermore. The blood has never lost its power. It’s because of what happened in that manger scene that I am able to know today that if I should die right now, I will go to be with My Lord, living in eternity with Christ.

Away IN a manger a son was born...a king was given...to us! Let's celebrate that! Tis the season!