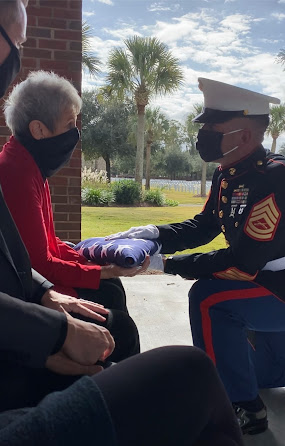 There is no other picture that I have ever seen that spoke more words and feelings into my heart than this one of a Marine presenting my Mom the folded flag in honor of my Dad at our families private memorial service last week. It was done with such reverence and precision. Dad would have been so pleased with the way the Marine Corps honored him and our family was moved by everything-the 7 guns shooting 3 rounds each, Taps being played and the presentation of the flag ceremony. Mom is such an amazing and strong woman. And our family did the best we could having only 20 minutes to do this due to COVID restrictions.

I'd never witnessed this military honor in person and seeing it for my Dad was something I will never forget. Dad was strong, intelligent, faithful and loving in every way. Our family misses him each and every day. We take hope in knowing that one day, we will all be reunited again with the Lord.

Just in case you didn't know, here is what the 13 folds of the flag represent: